We finally left Lavrio and have spent the next 10 days, mostly motoring , North up through the Evia Channel. Evia is an island just off mainland Greece and this route is usually taken to go up to the Trikeri Peninsula and onto the Sporades as there are sheltered harbours and safe anchorages to stop in. It was an important trade route in ancient times and also used by the Persians, Macedonians, Romans and the Turks when they invaded Greece. Interestingly, in 1941, the British Force, including Australians and New Zealanders, retreating from the Germans in Macedonia, came down through here and were evacuated from beaches in Evia and the Saronic Gulf.

It’s still quite early in the season and the weather this year hasn’t been quite as lovely as usual. We’ve had quite a few thunderstorms and it’s is definitely still chilly in the evenings so some of the places we were looking forward to seeing weren’t as expected.

Half way up we had to go under the Khalkis Bridge. There are two road bridges in Khalkis from the mainland over to Evia. The new one is high and boats can go under easily but they still have the old one in town which spans the 129 foot gap. It only opens after midnight to minimise road disruption so we had to book in and pay our €35 and then anchor in the bay for 8 hours waiting to be called. 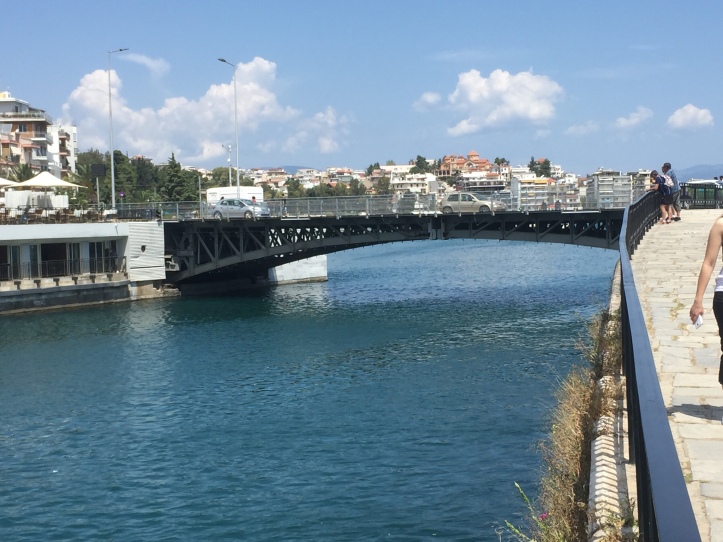 its all quite exciting as the pilot book warns of currents of 3-4 knots going through with lots of local fisherman milling about under the bridge so you have to try and stay in the middle and not wipe any of them out! We didn’t see them catch anything and we couldn’t quite work out what they were fishing for but got through safely and moored on the other side at about 1.30 am outside a bar. Perfect!

Our next stop was at Loutra Aidhipsou famous for its mineral water and spa treatments. The rich come here for pampering and there’s some seriously expensive hotels in amongst the simple tavernas.

The scenery has now changed and is stunning with heavily wooded hills either side of us. We stopped in Orei for a couple of nights which had had mixed reports but we enjoyed it and managed to get laundry and provisioning done.

Now heading off to the Sporades which looks like it’s going to be fantastic. Lots of Mamma Mia was filmed here and I’m planning to find that jetty to jump off and run up to that church! And yes Mel, I will be wearing dungarees!