Meandering Round the Inland Sea

The last couple of weeks have been beautiful with lovely sunny days with only the occasional huge thunderstorm. Our  trip round the Inland Sea continued firstly  in Sivota on the mainland.  This is a very busy place in the summer with charter boats and flotillas all calling in.  We had spent a night there at anchor earlier but  never actually went ashore as it  looked a bit frenzied but now it’s a delightful spot.  We spent a couple of days right in front of the Family cafe where we could dive into for a beer to shelter from the rain. Friends, Jay and Hannah and their daughter Aine are around on their boat, S/V Whuati (We Have Used All The Inheritance) so we’ve had some good company along the way. 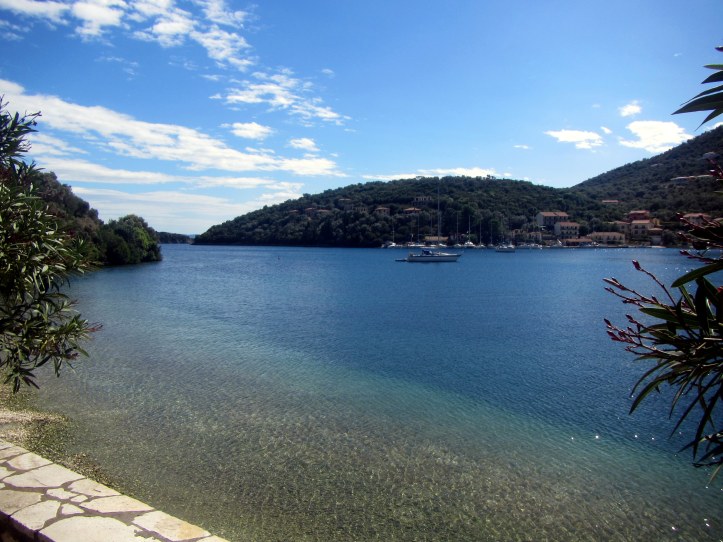 This was followed by a return visit to our favourite Kioni on Ithaca. Normally you have to get there early in the day to try and bag a spot on the quay but now there is plenty of room. We had the best meal of the summer here before the restaurant shut for the winter. 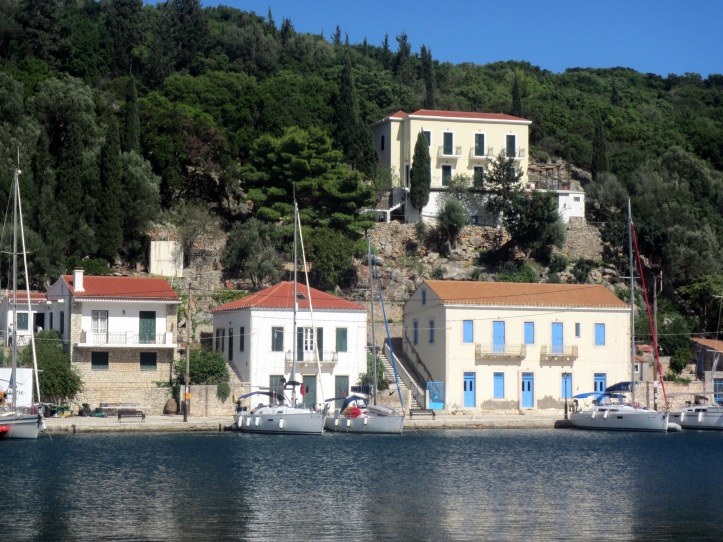 Kioni quay with gaps on.  Never seen before.!

After a few days back in Lefkas for more of that ‘mending things in beautiful places’ (a further instalment in the toilet tank story) then we headed off with Whuati and S/V Miss Molly, Jay and Hannah’s son Josh and girlfriend, Carmel’s boat, to Porto Spiglia (or Spartakhori) on the NW of Meganisi. Babis rules the roost here and gets as many boats in as possible. Anchoring is a bit difficult  with depths of 20m but he has put in laid lines so it’s pretty much expected that, if you use them,  you eat in his taverna. Apparently, at the height of the summer, there were at least 140 boats crammed in but when we were there, there were probably about ten. The chef has left for his winter job unfortunately but we still had a lovely meal there.  We also wandered up through the pines and cypress trees for a drink in the bar up in the village.  The view from there out over Nidri, Madjouri and across to the mountains on the mainland is stunning. 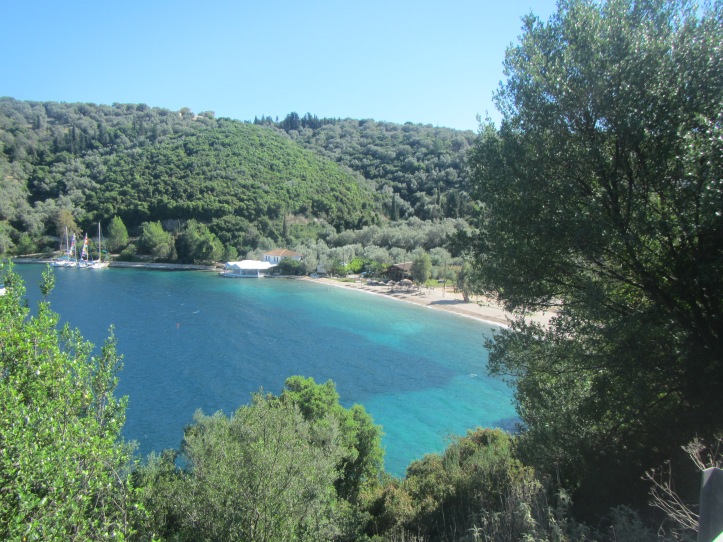 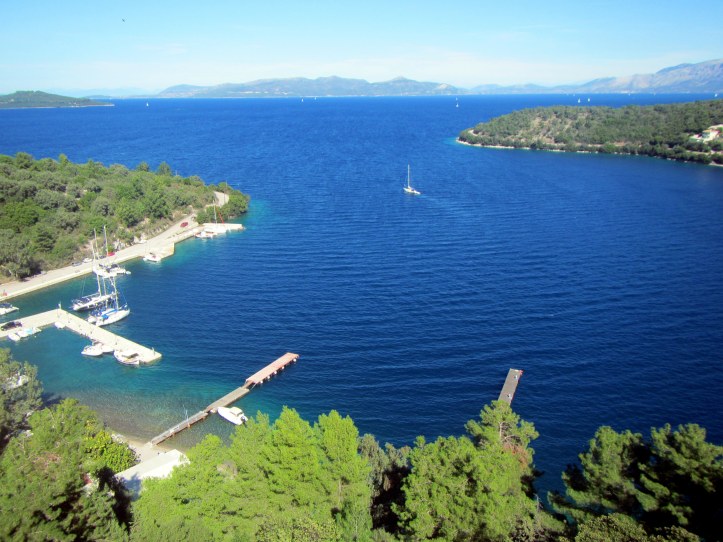 We had been told by a friend we met earlier in the summer not to miss Mitika, another non-touristy Greek working town on the mainland like Palairos so we all motored the hour and a half across and med-moored in the little town quay. It’s not the prettiest place in Greece, quite run down and shabby but surrounded by crystal green water with mountains on either side.  We had a lovely walk round the town looking into the little shops and bars and catching lovely glimpses of the bay through the gaps in the houses. The fishermen  on the quay had caught two beautiful mahi mahis.  We didn’t even know they had them in the Med. We had caught them in the Pacific and they  are the best fish I’ve ever tasted.  We’ll definitely make more of an effort to fish next year.  Back at the harbour we got talking to a couple on a boat near us who had planned to sail to Turkey but had got to Mitika and loved it so much they now rent a cottage in the village. She gave us pomegranates off their tree and freshly-pressed green virgin olive oil. 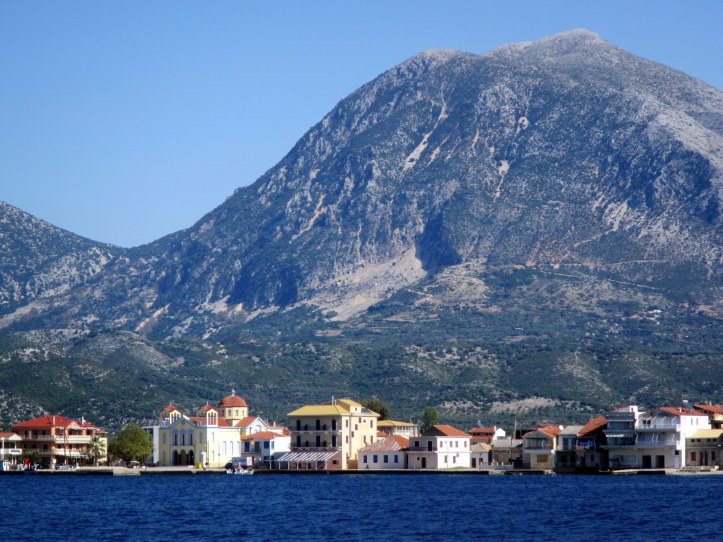 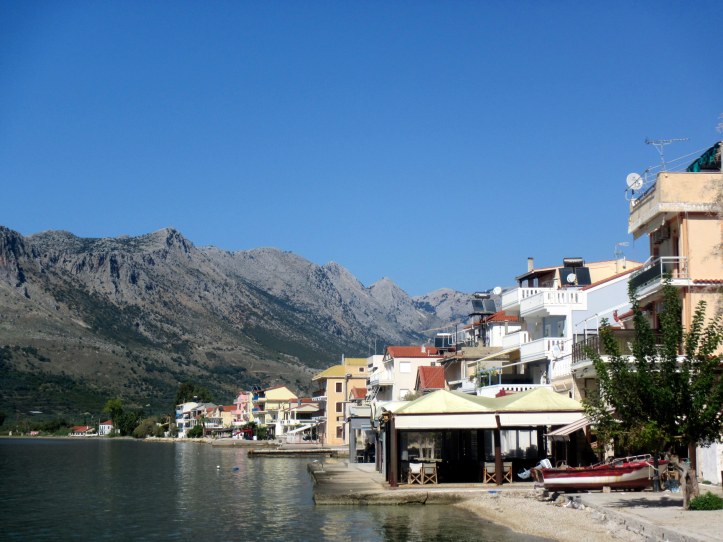 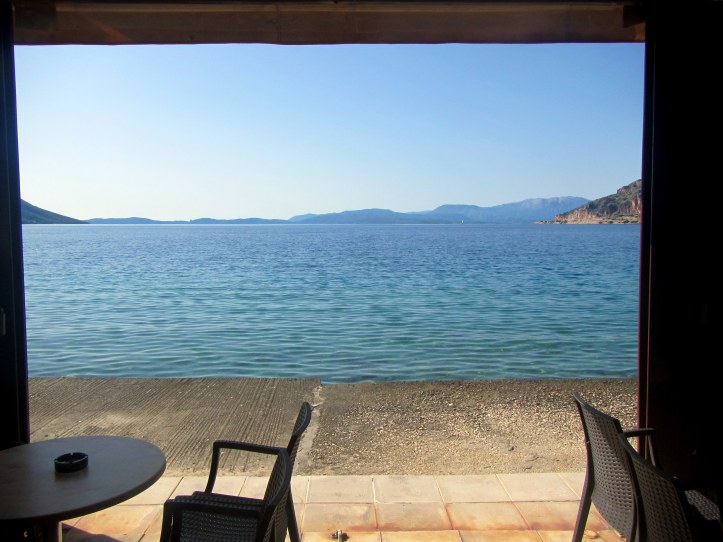 The next day was Josh’s 23rd birthday so we went back to Palairos for a celebratory curry and a few drinks. Josh and Carmel, with their friend Ian,  put us to shame by managing to drink for the most of the day and stay out until 4 am.  We managed to stay awake until midnight and, while sitting outside a bar for a final beer,  we all suddenly felt the table shake for a few seconds.  We all thought it was Josh mucking about but apparently there was an earthquake up in Northern Greece that measured 5.5 and we had felt it down here.  The barmaid said they get about 10-15 tremors through the summer.  It must be a constant worry in case the next one is like the one that wiped out Cephalonia in 1953.

We parted company from Whuati and Miss Molly the next day as we have to head off to Preveza. We met Jay, Hannah  and family through Stacey and Ken in Australia, who I met through the Facebook site,  Women Who Sail Australia.  Another example of how fantastic (and small)  this sailing world is! It’s been great to spend a bit of time with them and we’re looking forward to catching up again next year.

But for us it’s cleaning time!!