The great thing about being  on a boat means we can choose wherever we want to go and wherever we want to stop.  We can stay in busy  Greek tourist places with lots of others or we can seek out tiny little anchorages where we’re the only boat. However, we rarely go far away from the water and that does  mean you forget that people are going about their daily business away from tavernas and tourist shops.

This week our friend John from S/V Catalyst hired a car so he could go kite surfing and asked us if we’d like to go with him.  We spent a few hours watching with amazement as hundreds of kite surfers took to the air off Mylos Beach in Lefkas. Apparently it’s one of the prime sights in Greece and people come from all over Europe to fly there.

The  following day there was no wind so we headed off around the island. We had no idea there were such stunning beaches in Lefkas. We crawled our way up the windy road up to the top of the island and looked down on glorious, crystal green water and sandy beaches.

Unfortunately the roads down to the beaches are incredibly narrow with room really for only one car and we hadn’t intended to go down but found ourselves, due to poor road signs, accidentally in a long queue of cars heading down to Kathisma Beach which became gridlocked half way down at a particularly narrow bit. No one was moving up or down but eventually a Greek taverna owner took charge and, with much gesticulation, got us all moving again. A little further down the car in front stopped and put his two-way flashers on. We were too near him to pull out round and the car behind us was too near for us to back up. An Australian/English/Serbian ‘discussion’ then took place “What the **** are you doing, mate?! You can’t park there! “I put my flashers on! You’re too close to me! You should go round!” “We can’t go round, mate! You’ll have to move!” We eventually got past and arrived down at the ‘beach’ to find a horrible little piece of stony beach covered in umbrellas, large rocks with huge waves crashing over them and mad people trying to stand upright in the surf taking selfies sitting on top of the rocks as huge waves went over them. Not really worth the effort.  We turned to leave and bumped into our Serbian friend. Before hostility could resume, Andy, ever the diplomat, stuck out his hand and greeted him warmly and we all ended up the best of friends. Entente cordiale in action! 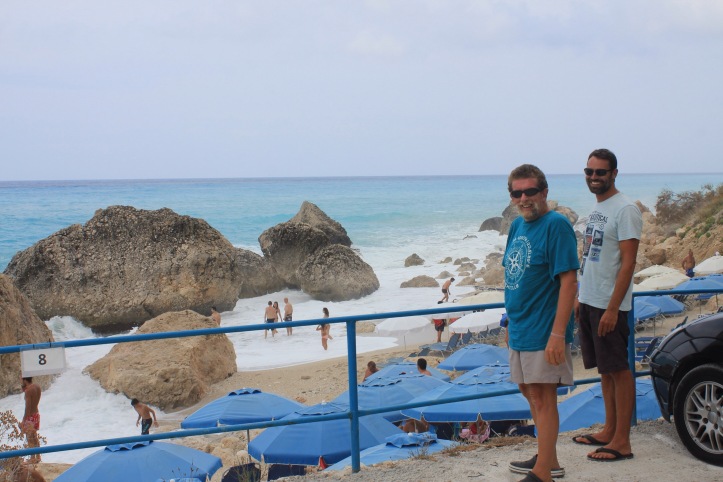 Further on we stopped for lunch at a little restaurant in Athani with lovely views of western Lefkas and had just settled in with a cold beer when the clouds came down, the temperature dropped and it poured with rain, the first real rain we’ve seen since we got here. We dived back in the car and returned to our rightful place. On our boats looking at the land. Far too much going on in there.