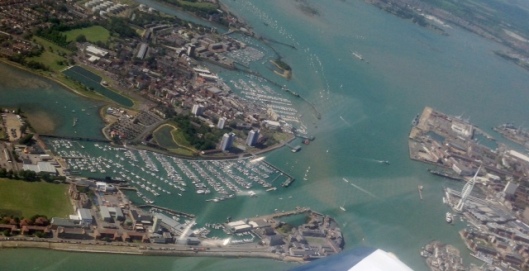 Aerial view of Gosport taken by my brother, Richard, when he flew over last week. Our flat is right by the bridge on the left side in the middle.

Gosport put on a great event yesterday on the waterfront and in and around Haslar marina. It was opened by Alex Thomson (I resisted the urge to ask him about the Hugo Boss Sail climb thinking it would be uncool but I wish I had now).

There was masses going on and hundreds of chances for kids to try sailing, stand up paddle boards, wind surfers, kayaks and lots of boats to look at including one of the 12 Clipper Round the World Challenge boats. They will be leaving here next summer with volunteer crew, each with a professional skipper, to race round the world stopping at 8 countries. They’re training for it now but there are still a few places left if anyone fancies joining one of them.  It only costs GBP 40,000! 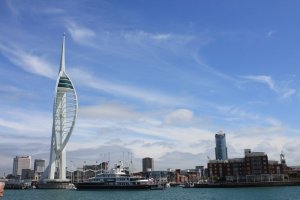 They put on free trips round the harbour on one of the ferries. You don’t realise how much is going on out there when you’re on land.

HMS Warrior is a steam-powered, 40 gun frigate built in 1859 and is now permanently in Portsmouth and open to the public.

MV Leander G is owned by Sir Donald Gosling, owner of NCP car parks (remember that when you have to pay 12 quid to park in a multi-storey).  She flies the white ensign because her owner is a member of the Royal Yacht Squadron which is only for very posh people.  She was chartered by Prince Charles and Camilla in 2008 for their royal tour of the islands of the Caribbean on the grounds of reduced carbon emissions over the use of an aeroplane. (See, Andy, they are in touch with the common people!)

HMS Bristol  (from our home town), a Type 2 destroyer and veteran of the Falklands war, is now a training and accommodation ship. A friend of mine was serving on her at the beginning of the Falklands War and reported for duty to head off down South but was told his services would not be needed! We never found out exactly what he’d done that meant he couldn’t die for his country! 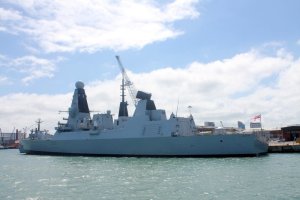